Bowled over by “The Great Pottery Throw Down” 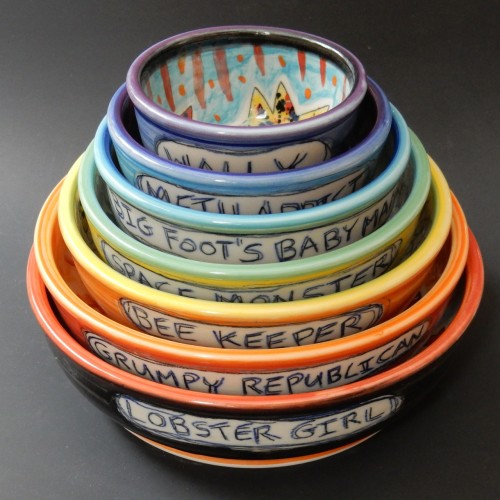 About a month ago, some of my potter friends on Facebook were posting a promotional video for a BBC reality TV show about ceramics.  “The Great Pottery Throw Down” trailer urged viewers to “join us to see who will be Britain’s top potter.” The only problem is, the pots that are shown in this clip are somewhat less than brilliant and the contestants are obviously mid-level ceramists hardly able to join the ranks of such luminaries as Bernard Leach, Lucie Rie and Michael Cardew. When I saw this, I groaned, “Why can’t they have real potters on this show?” I mean, if you’re going to dub someone the nation’s top potter, you really should start with a roster of top notch contestants, right? I was anticipating a real train wreck of a TV show. And full disclosure: I’m not a fan of reality TV. The singers are generally lousy and the judges tend to be obnoxious.

But I was totally wrong in my initial opinion of this program. After watching the first episode, I became an instant fan. The fact that the contestants are aspiring potters is a real bonus. They are average people with regular jobs who have fallen in love with the process of making pots and it really shows in the personal profiles they intersperse throughout the show. To have top-notch clay jockeys competing here would make it look all too easy. These potters are struggling at times and it really shows how hard it is to learn the craft of working with clay. And the program’s creators do a great job explaining the technical aspects of pottery along the way, so it’s a wonderfully informative show. Hooray! They are bringing the message of ceramics to the masses! Two clay-covered thumbs up from this professional mud-wrestler.

The first episode’s challenge was to make a set of nesting bowls, and it inspired me to take the challenge myself.  I decided to do seven bowls instead of five (two extra because I’m a pro). They had 2.5 hours to throw the pots, 1.25 hours to trim them and 2.5 hours to decorate them. I came in comfortably under time in the throwing and trimming but I took way longer in the decoration phase because that’s the way we do it here in Wallyworld.  Here’s a step by step pictorial of the process of making the set: 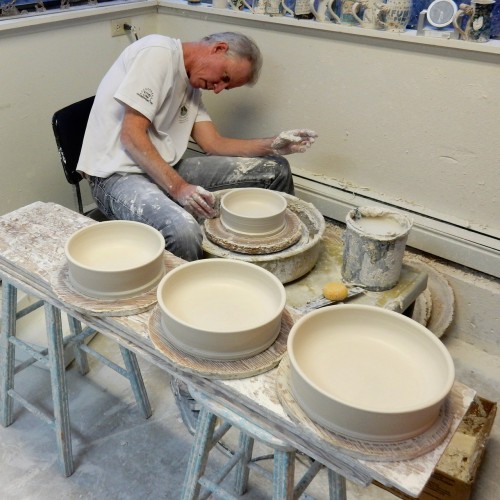 Friday, November 6: Throwing the pots was pretty straightforward and I started with the largest bowl first because it’s easier to go down in size than it is to go up. The real “Ah ha!” moment came when I realized that if I made them all the same height they would rise up in a graceful stack, kind of like a pyramid. The largest bowl measured eleven inches in diameter thrown and I took them down exactly one inch in diameter as I made the set.  I threw them a little on the heavy side as it’s a lot safer that way.  One warped or trimmed through bowl would kill the whole project. 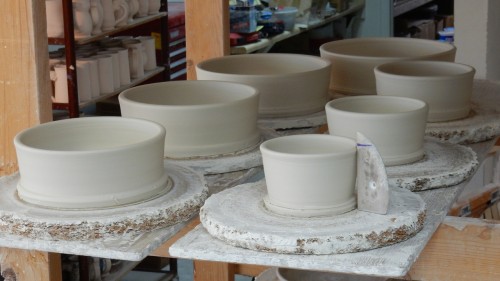 That three inch mark on the wooden rib was all I needed to get the heights consistent, and the dog dish shape is pretty easy for me to do.  I’ve been throwing the same clay body (Laguna’s S porcelain) since the 1980s and I’ve been making numerous custom dog bowls for years now. It’s a pretty easy form to throw once you get the hang of it. 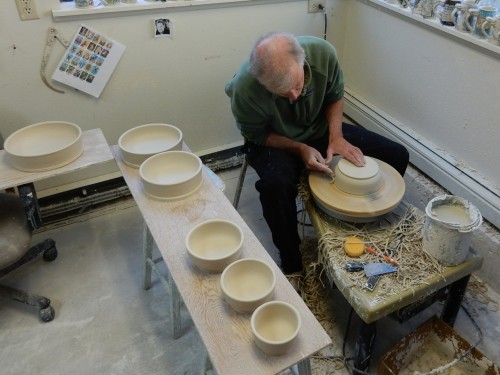 Saturday, November 7: Trimming was really straightforward and these bowls gave me no problems. I got the job done in under an hour and I realized that this exercise is a lot like a pro basketball player shooting free throws.  If you’re in the zone, it’s easy. 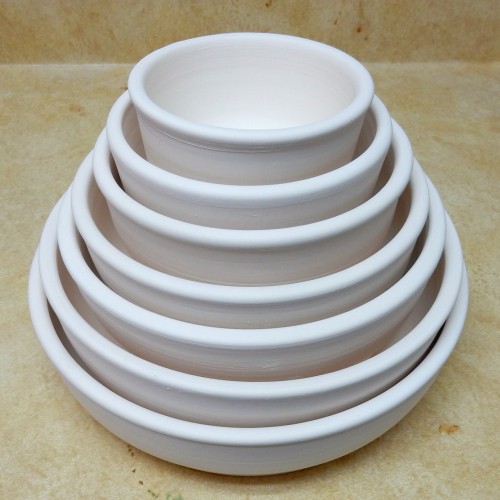 Thursday, November 12th: They survived the bisque firing just fine. I posted this pic on the Clay Buddies Facebook page with the caption, “Look who’s doing the Great Pottery Throw Down nesting bowl challenge” and it got over 600 likes. I guess I’m not the only one who is geeked about the show! 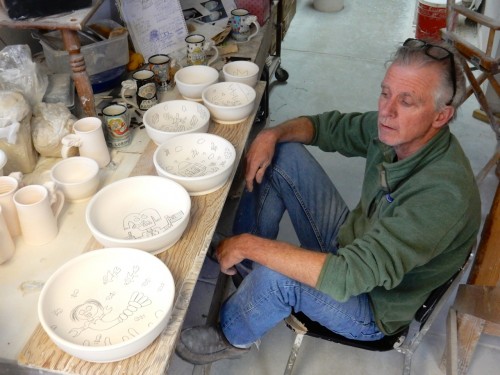 Friday, November 13th: With the kiln firing the next day, I start the process of decorating around three in the afternoon.  With seven bowls, I realized that a rainbow banding effect on the rims could look pretty good and the imagery on the inside of the bowls is to be a celebration of the weird characters that inhabit my pots.  Wally is on the smallest bowl, followed by the meth addict, big foot’s baby mama, the bee keeper, the space monster, the grumpy republican and one of my all-time favorites, lobster girl. If you just happened to wander upon my website for the first time right now and you’ve never seen my work before, you are probably having a real WTF moment, huh? 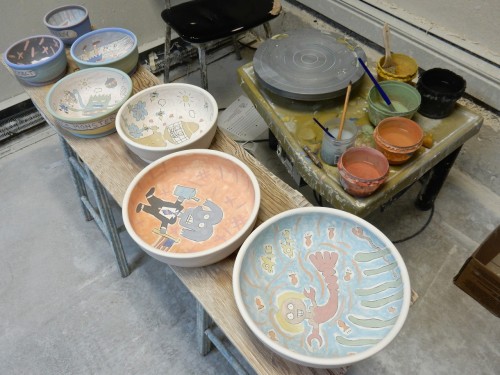 I really struggled with the outside color scheme on these bowls.  I knew I wanted to have the rainbow colors on the rims, but how to do the outside was a real challenge.  Since the bowls raised up, I wanted a “filing cabinet” effect with the character’s names on the outsides of the bowls.  I think it worked really well and the biggest thrill for me was unloading the kiln on Monday, November 16th to find zero flaws in the bowls.  I nailed it!  That violet stain on the rim of the smallest bowl is a really fussy color to get at cone 10 and it sometimes burns off if the firing is too hot or if you get some reduction flames in the firing.  I have an 18 cu. ft. propane shuttle kiln, and it slips into reduction really quickly if I’m not careful with the adjustments on the burner valves. Making pottery can be really frustrating or really exciting, depending on how the kiln fires off. UPDATE: This bowl set sold on 11/30/15. Hooray! 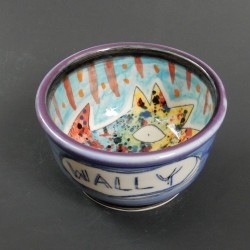 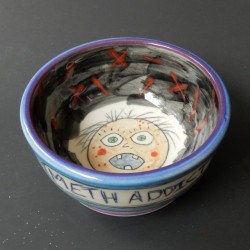 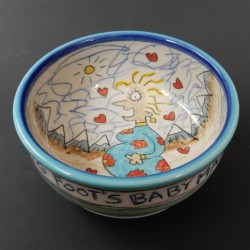 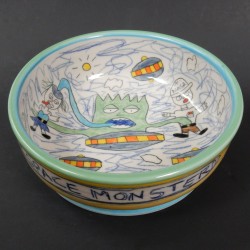 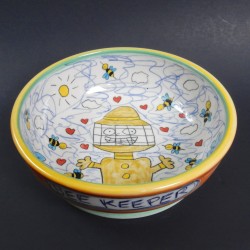 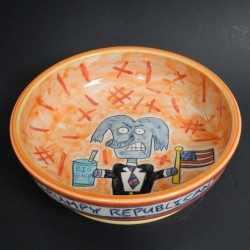 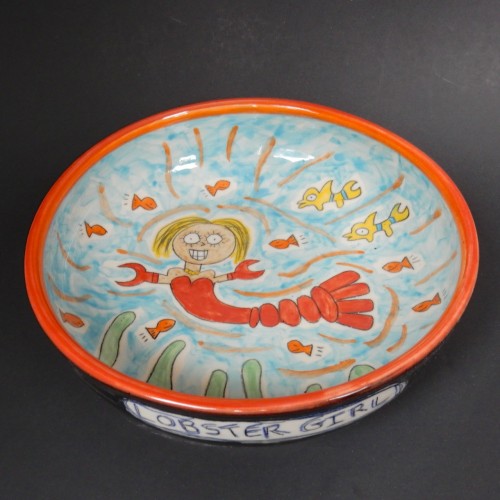 Also out of the kiln this week is a new mug design and a new ornament.  “Warning! Multi-level marketing systems are viruses from outer space!” is yet another in paranormal mug series and can be purchased in my online store. It was inspired by the movie, “The Invasion of the Body Snatchers” and everyone who has tried to sell me something from through MLM schemes. I really hate that type of marketing! 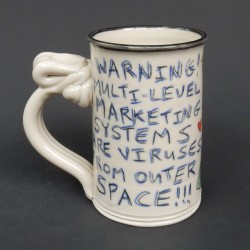 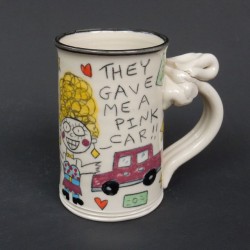 And here’s our latest ornament.  It’s wheel-thrown and hand-decorated and sells for just $13.50 in my online store. Profits from the sale of these ornaments go towards lobbying for nationalized healthcare for imaginary beings. Ho! Ho! Ho! 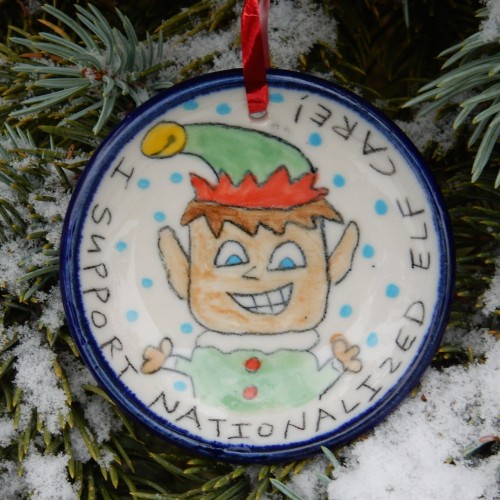 This entry was posted in New items, Wallyware collectables and tagged pottery on television, The Great Pottery Throw Down, Tom Edwards pottery, Wallyware. Bookmark the permalink.