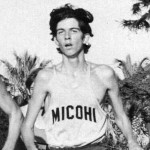 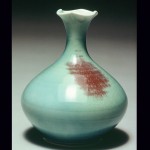 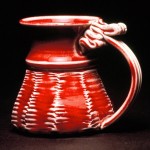 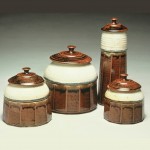 Born and raised in Manhattan Beach, California, Tom Edwards took his first ceramics class at Mira Costa High School when he was fifteen years old. A ceramics geek from the very first week he started working with clay, Tom took pottery classes throughout high school and sold his work in local craft fairs. He also excelled in long distance running and in 1974, at the end of his senior year established a new school record in the two mile (9:07.0).  This record was broken by just one second seven years later by 1988 Olympic 1500 meter finalist, Jeff Atkinson.

While pursuing a B.A. degree in Art History at UC Santa Barbara, Tom took two years of studio art classes in ceramics and sculpture. During his senior year, he realized that he wasn’t cut out for the world of graduate studies in Art History, so he decided to make pots for a living. With a thousand dollars saved from a summer job and a working automobile, Tom started renting studio space in 1978 at Santa Barbara Ceramic Design, a small art pottery business. Working at SBCD was an excellent learning environment as the potters and artists there provided a good education in how to make pottery for a living. Tom’s early work were functional pots covered with striking high fire copper red, iron brown and rutile blue glazes. 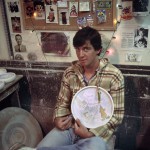 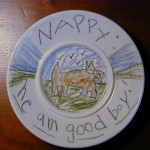 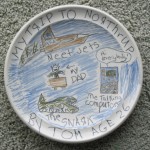 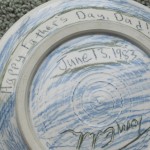 The Dawn of the Wally Era

By 1983, Tom had a relatively successful line of pottery which he sold mainly through retail craft fairs. It was at this time that he came up with the idea of Wally. “A friend of mine was in med school and she had a delirious patient who kept talking about Nappy. After a week or so, she realized that the patient was talking about a dog. It was a turning point in Tom’s career: “I made this weird little plate to commemorate the incident and I really liked the way it looked. I was compelled to make more pots like this. I got the name ‘Wally’ from these British guys I worked with, it’s slang for ‘nerd’. One day I started drawing these really simple Wally jokes on the pots just for my own amusement. When I took them to a craft fair, the response was incredible. Within a month, I had an order for a complete dinnerware set and people were asking for more Wally adventures.” 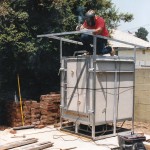 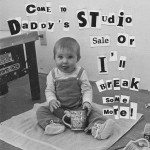 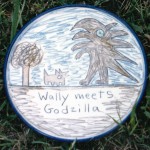 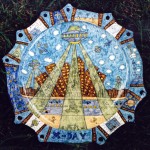 The next year Tom moved to Los Angeles where he built a small studio in his sister’s garage. He dropped his previous line of pottery and he began decorating all of his pots with cartoon imagery. With his work selling well in fine craft galleries, Tom took on a full-time employee to help with painting and shipping. In 1986, Tom married Lori Crane, his college sweetheart, and the next year they purchased a home near the Fairfax area of Los Angeles. They built a small studio in the detached garage in the backyard and installed a 16 cu. ft. gas kiln outside. The demand for Wallyware was growing and Wally’s adventures started to take on a more political bend. For a good look at the some early Wally pots, take a look at the post, “The 22nd Century Collector’s Guide to Wallyware”. The early designs were simple and childlike, such as “Wally meets Godzilla” and “Wally sees God”.  Robin Edwards was born in 1989 and Monica Edwards followed in 1991. Lori received her PhD in Public Health in 1991, just four days after Monica was born. In the fall of 1991, Lori got a job offer with AMC Cancer Research in Lakewood, Colorado. “It was an offer we couldn’t turn down. I remember thinking how bad we’d feel if we didn’t make the move to Colorado,” said Tom. This turned out to be especially true because the day after the Edwards-Crane family left Los Angeles, the LA Riots began. “It was the most surreal experience of my life. We moved into this beautiful house in Evergreen the very same day Los Angeles was burning”,  lamented Tom.

Tom and Lori’s new home in Evergreen was big and the studio remodel was ambitious. Putting an 18 cu. ft. propane-fired shuttle kiln inside the structure with proper permits turned out to be a real challenge. But by the fall of 1992, the project was complete. Wally’s adventures continued to become more bizarre and outrageous in the 1990s. A big media event in Colorado in 1993 was the ill-fated cross-country ski trip of Ken Torp and six others in Aspen, CO. For two days, the TV news broadcast dire reports on the lost skiers. When the two leaders of the group skied out on their own, taking the only stove with them, the media turned on Ken Torp, the man responsible for leaving five people in a snowstorm without a stove. Fortunately, all seven survived the experience. Tom was quick to capitalize on this story with, “Wally and Ken Torp go rock climbing. Ken decides that Wally can’t keep up.” The cartoon shows Ken cutting Wally’s rope. This one design led to numerous newspaper articles about Tom and Wally, an eight minute spot on “Good Afternoon Colorado”. But the best was an angry “I’m gonna be his worst nightmare!” threat from Ken Torp. “It was really fun to have vocalized the public outrage over this event,” said Tom, “even if it did make me worry for a few weeks about what Ken was going to do to me if he ever got hold of me.” Ten years later, the Denver Post ran a lengthy “where are they now” article about the seven skiers, and one paragraph in the story was devoted to Tom and Wally’s part in the aftermath of the event. 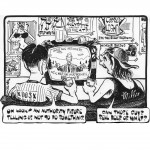 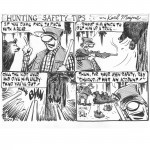 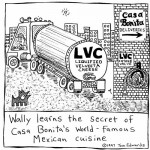 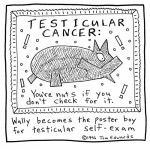 In 1993 Tom and his assistant Christopher Smith took on the job of producing the weekly cartoon, “Lookout World”. Featured in the editorial pages of The Canyon Courier, The Columbine Courier and The High Timber Times, it was a unique collaboration that featured Smith’s serious cartooning skills and Tom’s biting political point of view. “Chris is a great guy to work with and we really learned the craft of editorial cartooning by doing that job together.”  In 1996 they won the Colorado Journalists’ award for ‘Best small newspaper editorial cartoon.’  After three years of entertaining their readers in Evergreen, “Lookout World” ended when Chris moved to Boulder.

The “Lookout World” experience inspired Tom to create the “Wally” cartoon which ran for eight years in The Canyon Courier. “Having a weekly cartoon deadline was a great way to develop ideas and learn to draw.” But when the newspaper acquired a new editor in 2004, the Wally cartoon was canned for the sake of a slicker looking newspaper. 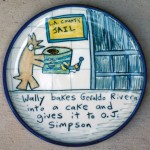 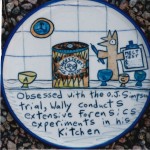 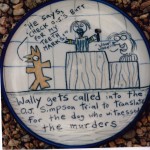 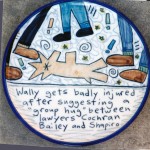 The nineties saw a flurry new cartoons, and with every big media event came a new adventure for Wally.  The first of these to come out of the infamous O.J. Simpson trial was “Wally bakes Geraldo Rivera into a cake and gives it to O.J. Simpson”.  This was so well received that it ended up on a mug in Geraldo Rivera’s hands on his cable TV show.  About a month later, Tom received an order for a two dozen plates from the wife of Los Angeles District Attorney, Gil Garcetti.  These ended up given as gifts to the entire prosecution team, and Tom actually spoke with Gil Garcetti over the phone about an issue of returning some of the plates for other designs.  “It was so bizarre” says Tom “they wanted to exchange some of the plates for newer designs, so the wife had her husband call to make sure this was OK with me.  This was during the height of the trial and here I am talking to this incredibly powerful person about a simple exchange of pots.  I was tempted to make a joke like, ‘No! All sales are final, Man.  Get a lawyer and sue me!”  Tom was sworn to secrecy about not going to the media about this sale, as it would have made a great local news story, and great advertising for his work. 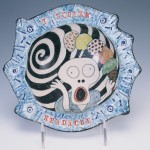 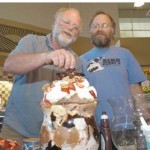 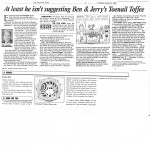 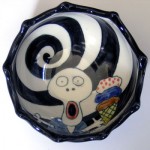 At the suggestion of Meryl Howell, the owner of The Evergreen Gallery, Tom applied for a show at the Vermont Clay Studio called, “I Scream, You Scream, And Exhibit of Ice Cream Dishes”.  It was juried by Ben Cohen of Ben and Jerry’s Ice Cream, and the winner of the show was to be given a year’s supply of ice cream.  Tom’s “Ice Cream Headache” was chosen as the best and an envelope with 52 coupons for pints of Ben and Jerry’s was put in the mail.  “It was a real thrill to win, but I tell you, it sure wasn’t a year’s supply of ice cream in our household.  We lived like ice cream kings for about four months, and then the coupons were gone.”  This is a perfect example of just how lowly the profession of pottery can be:  one wins a national art show, and the prize is worth roughly $150.  Go figure. 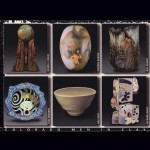 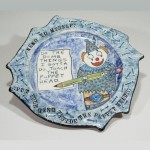 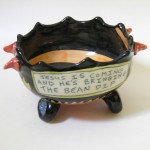 The past decade has seen a large number of new Wally adventures, an online webstore and Tom’s participation in a few prestigious group shows.  In 2001, Tom was accepted into the “Colorado Clay” show at the Foothills Art Center and received a nice mention in Denver Post article about the show.  Reviewer Kyle MacMillan wrote, “Deserving mention among vessels are the fun-loving, brightly colored pieces decorated with cartoonlike imagery by Tom Edwards of Golden.  It’s hard not to like ‘Apocalyptic dip Bowl,’ for example, a black piece adorned with flame motifs and a panel on the front that states, ‘Jesus is coming and he’s bringing the bean dip.”   A year later Tom was one of the featured clayboys in the “Colorado Men in Clay” show at the Artists on Santa Fe Gallery.  This “men only” show was a tongue in cheek response to the “Colorado Women in Clay” show from a year earlier.  Also of note in this decade is Tom’s renewed interest in long distance running.  In 2007, at the age of 51, he broke the over 50 age group course record  for the Denver Marathon with a time of 3:06:01.  The development of this website in January of 2010 will mark a new era for his work.  Stay tuned to see what happens!

One Response to About the artist