Permit me to indulge myself for just a bit here and let us imagine that it’s one hundred years in the future and Wallyware pottery has become a collectable item. For the record, I never tell fans of my work to buy it as an investment, so we are just pretending here. But a century from now these pots would certainly make an entertaining feature on a futuristic version of “Antiques Roadshow”. And it’s not unrealistic to think that the tens of thousands of pots I’ve created in my lifetime could be enough volume to warrant a small collectables market in the next century. Only time will tell. One thing is for sure, the topical humor I’m doing now is going to seem like it’s from another planet to people in the distant future. So let’s dig deep into the Wallyware catalog and unearth some esoteric and already ancient Wally adventures that will be the most collectable of the bunch, due to their extremely limited availability and/or their significance to history:

1) “NAPPY! HE AM GOOD BOY!!!” (1983) True fact: There is only one of these, and it is the very first image of Wally that I ever drew. It was a gift to my friend Liz, to commemorate an experience she had as a medical intern. Don’t be surprised if someday there are imitations of this plate now that its picture is posted on the web. 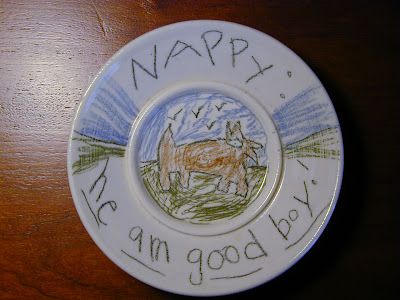 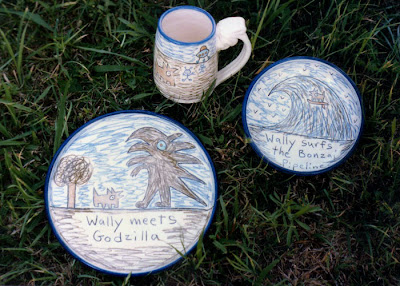 3) “Happy Wedding, Julia and Keifer. Love, Wally” (1991) Inspired by the big celebrity news of the day, this joke was drawn on only a couple dozen plates. (Note the painted-on sale price sticker!) A few years after I created it, one of the galleries that shows my work sold it to a friend of Julia Roberts who allegedly gave it to the academy award winning actress. How fun! 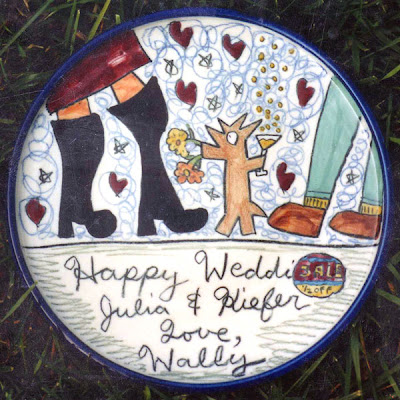 4) “While negotiating a labor contract with Zigfried and Roy, Wally encourages his clients to get tough with management” (1990s) I created this joke for a fine craft store in the MGM Grand at Las Vegas and it sold pretty well for them. It was kind of creepy in 2003 when the news broke about Roy Horn getting attacked by his tigers. 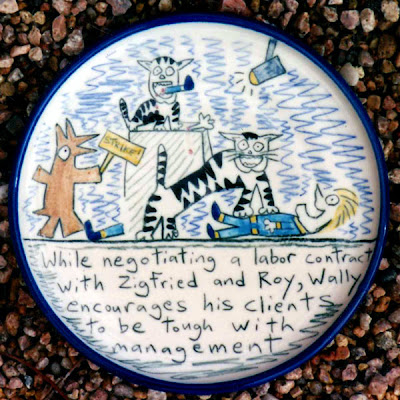 5) “Wally and Up with People sing their way into the Guinness Book of records in a ditch in Waco, Texas” (1993) I made less than a dozen of these just one week before the Branch Davidian compound was burned to the ground by the Bureau of Alcohol, Tobacco and Firearms. We shipped the first ones out to Twist Gallery in Oregon, and they arrived the exact same day as the tragedy. The gallery owner called us and said, “We need to send these back.” 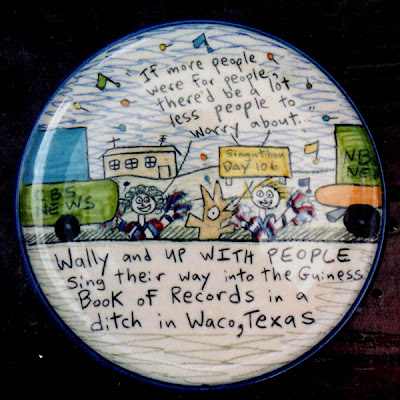 6) The “Wally and OJ” series: 1995 was a real boom time for us with the OJ trial. The Geraldo Rivera joke was the first, and Geraldo himself held up a mug with this cartoon on his TV show. We did a series of spin-off adventures about the trial, and the high point of it all was sending a batch of plates off to the prosecution lawyers for a special order from the DA of Los Angeles, Gil Garcetti. I even got to talk to Gil on the phone one day. It was so weird! 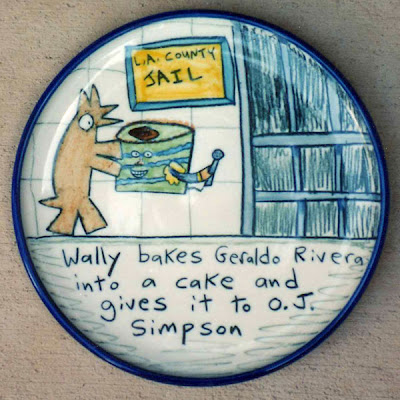 7) The Oregon Bach Festival series (1990s): For a string of about five or six years, my account in Eugene, New Twist, would order commemorative Wally designs for the Oregon Bach Festival. They were a big hit with the musicians at the festival, and the subjects of the jokes were wonderfully esoteric. 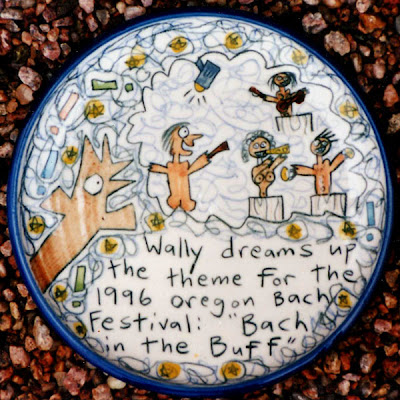 8) The Provincetown gay theme series: In 2004 I received a really huge order for ten different gay themed Wally adventures for my account in Provincetown, MA. That summer we produced a couple hundred pots with Wally as a drag queen, Wally as a giant ape carrying female impersonator Ray Fay to the top of a skyscraper, Wally cuddling with “The Bears” etc. It was quite the left-wing soapbox tour de force! 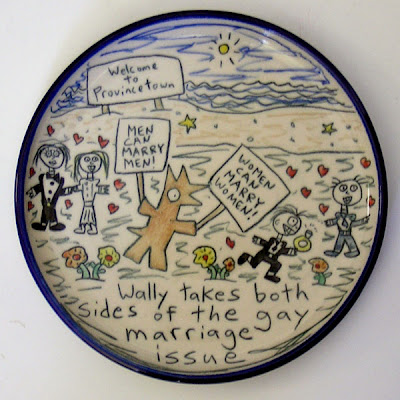 9) “The Unsinkable Molly Brown Spittoon” (2008) Every year I donate something to Rocky Mountain PBS station and this year I got inspired and created an epic tale to grace a spittoon. It sold for $250.00… cheap! It’s definitely a one of a kind. 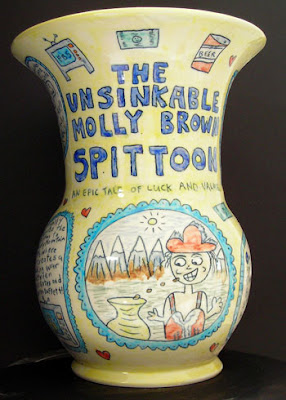 10) “Wally creates the ultimate political reality TV show: ‘The Perils of Palin” and “Wally defends Sarah Palin’s stand on hunting wolves with helicopters with some folksy backwoods wisdom” (2008) These two adventures celebrate the overwhelming national spotlight on that spunky right-wing Alaskan governor that dropped into our laps a few months ago. I’m hoping that she will go away now, but only time will tell. 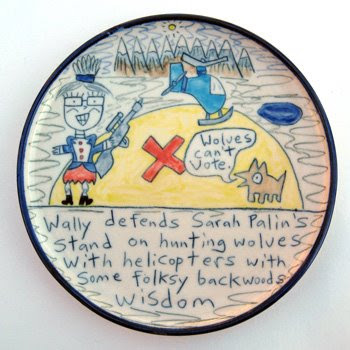 If you happen to have any old Wally ceramics out there that might be worthy of this list, feel free to post the titles below. The really odd thing about doing this line of pottery for as long as I have is the fact that there are pots out there that I don’t even remember making. I have shoe boxes full of photos and memorabilia, but I don’t have records of everything I’ve done. It’s going to be an interesting task for folk art historians of the future to nail down all those esoteric designs out there!

One Response to The 22nd Century Collector’s Guide to Wallyware