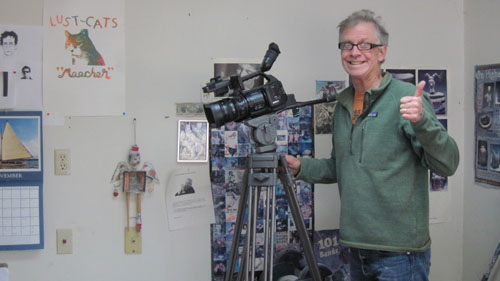 I’ve got a new title to add to my resume: “filmmaker.”  The past couple of weeks I’ve been making some simple homemade videos for my daughter, Monica who is a middle school English teacher in Phoenix, AZ.  Next month her seventh graders will be reading the book, “A Single Shard” by Linda Sue Park. It’s a touching story about a homeless twelve year old boy in twelfth century Korea and his desire to make pottery like the master potter in his village.  The videos I’m making for Monica’s class are designed to compare how I make pots in the present day with how they used to make pottery nine hundred years ago.  Surprisingly, there are more similarities than differences.  You can see more on that when we get those videos edited and up on You Tube.

So last week, I came up with this wild idea to do a time-lapse video of the process of unloading and loading my kiln.  The following Monday we were going to be doing back to back firings with a glaze rolling out and a bisque loading in.  My little camera doesn’t have this function on it, so I called my friend Len Aitken (professional filmmaker) and he loaned me his “industrial strength” camera for the project.  It turned out to be a lot of fun setting up the shot and learning how to use the camera.  I estimated that I could do the kiln job in about an hour, so I bought a cheap big clock and nailed it to the post by the kiln.    The shoot went pretty smoothly except for thirty-five minutes into the film where I bumped the clock and it came crashing down on to the floor.  But I totally hit my mark at the end of the hour, and this project far exceeded my wildest dreams for what I had initially envisioned.  This is primarily due to the fact that Len did an amazing job on the editing and the technical support.  I’m also really happy with the song we picked for the film.  Keep on Movin’ is by King Tuff. I’ve been listening to the King Tuff album practically nonstop for over six months now and if you like this song, you should just go buy it because every song on it is a total gem.  And now, without any further ado, I present you with my new video: