Inspired by Rush, trash and the Dalai Lama. 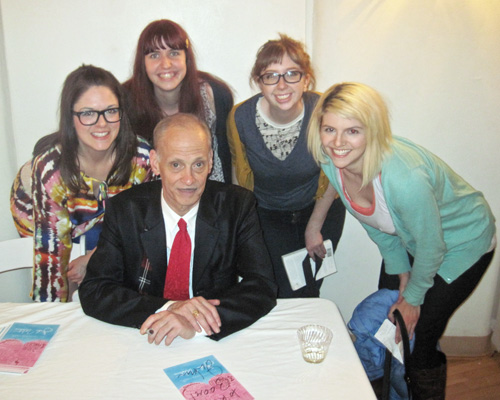 It’s always a thrill to see your heroes in person, and last weekend I was able to see one of mine: filmmaker/author/actor John Waters. He gave an inspiring talk about his life and career at The Rocky Mountain College of Art and Design in Lakewood, CO.  I went with my daughter, Robin and we sat with a group of her journalist/musician friends.  As the evening progressed, we managed to snag some passes from other journalists for the meet and greet party after the lecture, where I was able to tag along and take the above picture! What stuck with me most from the evening is how gracious and appreciative John Waters is of his success as the so-called “Pope of Trash.”  I took this thought back to the studio on Monday morning where hundreds of pots were waiting for me to decorate them, and I realized that I’m pretty darn lucky to be doing what I do for a living, too.  So last week I came up with six new designs!  They are, of course, for sale in my online store.  Here are the stories behind the pots: 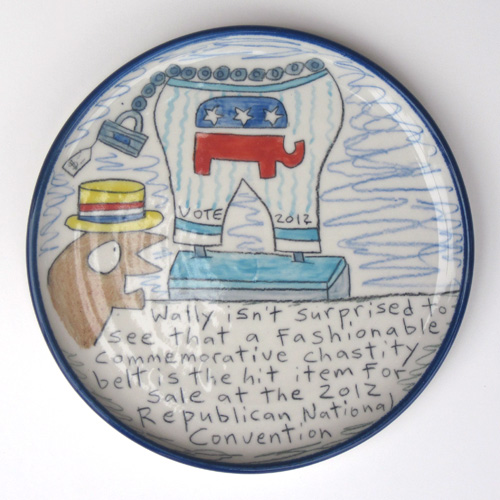 Thank you Rush Limbaugh, for going totally crazy on the subject of birth control a few weeks ago and giving those of us in the humor business some great new material to work with.  This cartoon came together really quickly as I thought about how creepy and weird the GOP is becoming with regards to women’s issues.  I think this one is going to be a real hit this year! 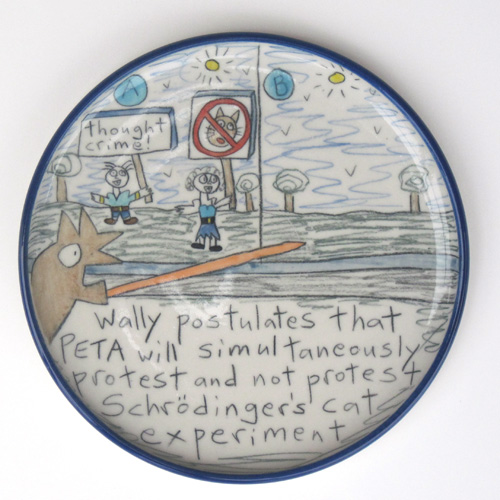 OK.  So if you don’t know the story behind Schrodinger’s cat experiment, just move on to the next design because I’m not going to explain it here.  But I will say that this cartoon came to life when I read “Physical Reality and Common Sense” by Walter G. Edwards (my dad!).  As I poured over his descriptions of special relativity theory and quantum mechanics, the thought experiment about the cat who was both dead and alive at the same time stuck in my mind and I realized that this is the kind of thing PETA would have a hissy fit over. 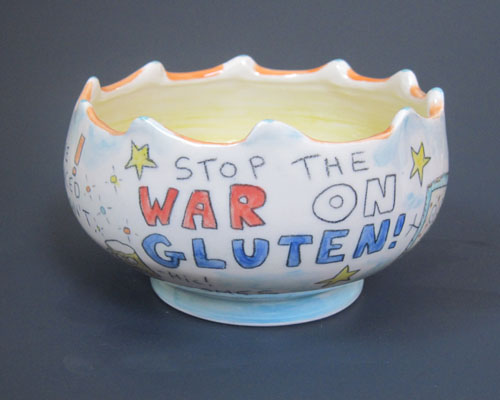 Politics isn’t the only thing that’s dividing our country these days.  Close behind is food, with gluten being the number one issue in this gastronomic civil war.  I’m taking a stand here with people who like to eat wheat, so if you are gluten intolerant, this bowl isn’t for you.  Bon Appetit! 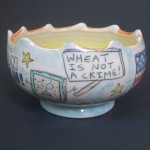 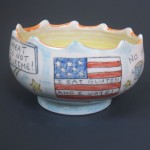 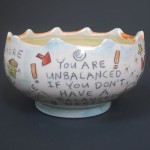 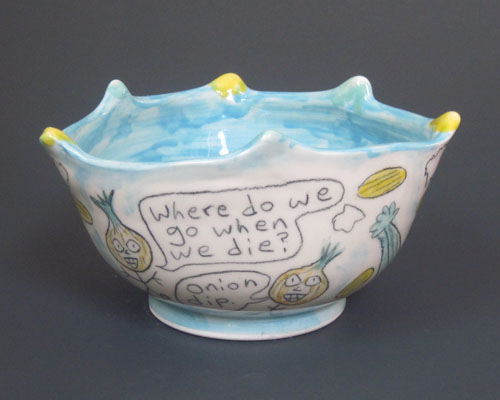 I’ve come to realize that my best selling bowls all specifically state the food item to be consumed in them: guacamole, ice cream, cat food, cocktail nuts, etc.  So here’s another cool joke about one of my all-time favorite foods: onion dip!  Pass the breath mints, please. 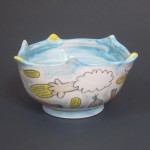 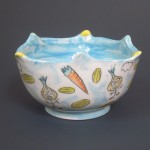 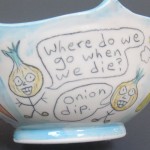 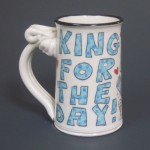 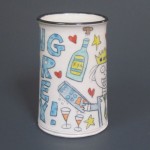 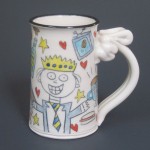 Here’s a pair of mugs that are shamelessly aimed at specific gift markets.  I’m not quite sure why the king is lazing around all day while the queen is working like mad, but they do make a nice pair, don’t they? 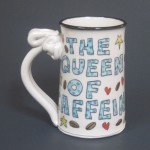 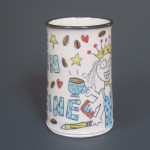 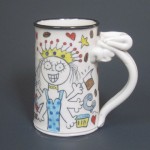 And last but not least, I have another great story about meeting an inspiring person.  My daughter, Monica, is on a nine month trip in Asia with a group of twenty-five other college students from the University of Puget Sound.  They have been taking classes in Mongolia, China, Malaysia, Viet Nam, Cambodia and India.  The day after Robin and I saw John Waters, I received an amazing email from her describing their meeting with the Dalai Lama in Dharamsala, India on March 10, Tibetan National Uprising Day.  Her words were so touching and she was so moved by the event.  I’m still marveling at the fact that my two daughters were halfway around the world from each other on the same calendar day having oddly similar moving experiences.  For those of you who have never seen Monica, she is just to the left of the Dalai Lama, holding his hand. 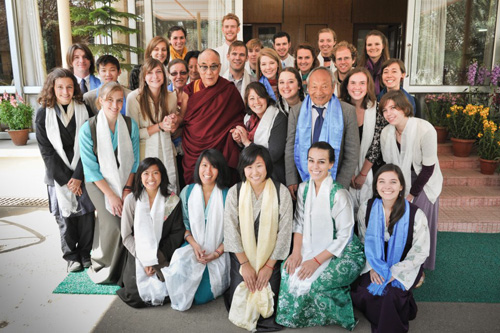 I’m decorating another kiln load next week, so look for more new stuff here in the beginning of April!