“You gotta read this interview!” 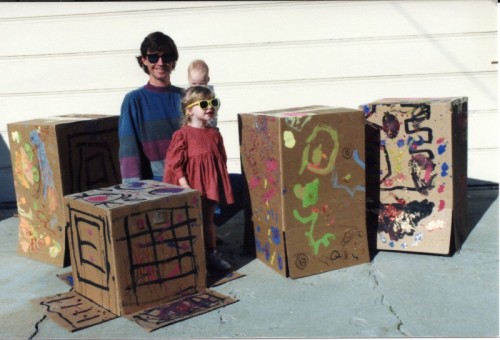 This picture has a great story.  Way back in 1991, we lived in Los Angeles and my daughters, Robin and Monica were two years old and six months.  It was December, we were shipping pots like mad for the holidays and I came up with a really fun art project for Robin and I to do.  We laid out a couple dozen blank shipping boxes, broke out the poster paints and glitter and went to town on the blank boxes.  The next day we had an “art opening” in the driveway and we took some pics.  I remember we wore the sunglasses because we were “way-cool artists.”  All those boxes got shipped out during the following weeks and a lot of that glitter ended up all over the bottom of the UPS truck.  I have a vivid memory of the poor UPS guy carrying out the boxes and his extremely hairy arms were covered with glitter.  Good times!

So I found this photo as I was frantically digging through our entropy-impaired family photo collection because Robin had called an hour earlier.  She needed a pic for the lead-in shot for her interview with me and she had to make a deadline.  Finding this image was a godsend and it brought back some wonderful memories.  You gotta read this interview!  I can’t rave enough about what a great job Robin did on it.  We chatted about how I became a potter, Wally’s connection with the O.J. Simpson trial and our shared memory of the time I won a year’s supply of ice cream in an ice cream bowl show.  I was so touched by her words and it was truly the nicest Fathers’ Day gift I’ve ever received.  You can read the interview here. I had a great day yesterday even though both Robin and Monica were out of cell phone range and I didn’t get to talk to them.  Monica was hiking on a glacier in Iceland after completing her first year of teaching 7th and 8th graders, and Robin was at a girls’ rock band retreat somewhere in the woods near Seattle.  When your kids are happy, you are happy. 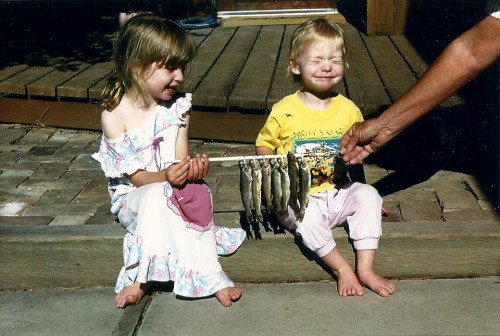