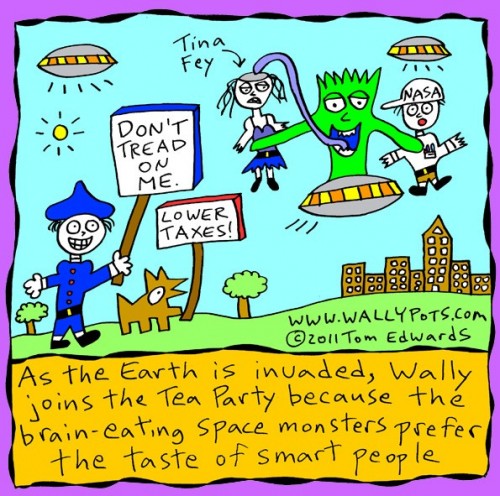 FINALLY!  A new Wally cartoon!  I’d been beating my head against the wall for a long time, trying to come up with a good Tea Party joke and nothing seemed to hit the mark. This weekend I was brainstorming ideas and setting goals for the week.  I simply had to have a new joke on the pots for this week’s firing.  I’d come up with a pretty good one with Sarah Palin and Ted Nugent winning the 2012 Presidential ticket, but it didn’t seem quite right.  There’s an old saying in the cartoon world, “When you wrestle with a cartoon, the cartoon usually wins.”  So the next thing that happened was a minor miracle.  I woke up at 4 a.m. on Sunday morning with the perfect joke in my head.  The basic idea, composition and words “brain-eating space monsters” were all in the dream.  How cool is that?!!  A good Wally cartoon is like an entire movie in one panel and one sentence.  What I love about this one is the series of multiple ironies: Wally is using his smarts to act stupid to stay alive, the guy about to get eaten works for a government agency that loves outer space, the slogan “Don’t tread on me” is getting a whole new meaning, and even a few more if you think about it.  I think this one is going to be a hit!  If you wish to purchase a mug, plate or bowl with this design, head on over to my online store and place an order. 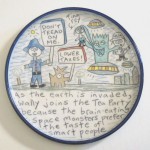 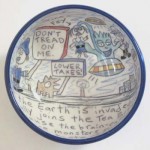 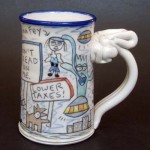