A big part of my job as a potter/cartoonist is coming up with new jokes to put on my pots. It is by far the most challenging and mysterious aspect of my work. It can be wonderfully easy or totally exasperating, depending on how the idea comes to me. I have all the creative issues that regular cartoonists deal with plus one extra hurdle: the joke has to be something that people will want to look at while they drink their morning coffee. I’ve noticed that this means that just about any joke on the subject of coffee is pretty much certain to sell well. But esoteric ones like “Wally introduces Pee Wee Herman to Jocyln Elders. Kleenex is required before they shake hands.” really don’t have that much sales appeal. What was I thinking when I came up with that one? So while I’m banging my head against the wall looking for new material, I’ve got a marketing director in the back of my brain saying, “Make sure it will sell!”

Right now, a lot of the galleries that carry my work are begging for new jokes about Barack Obama. I’ve been grappling with this subject for almost a year now, and I have yet to come up with a really good zinger about the senator from Illinois. And a lot of my fellow humorists are in the same boat. Sarah Palin is a total goldmine for all of us. There is so much goofy reality to that $150,000 wardrobe hockey mom that the sky is the limit for jokes about her. But getting a good laugh out of Mr. Obama tends to be a real conundrum. This was brought home to me the other night while I was watching Dana Carvey on The Tonight Show. He is absolutely amazing at doing impersonations, and he did a brilliant job of lampooning recent newsmakers: Biden, McCain, Palin, Tom Brokaw, etc. But when he did his impersonation of Barack Obama, it fell totally flat. I was floored by this, and it completely confirmed my gut feeling that the man who just might be our next president is going to be a tough subject for satire. But I’ll keep working on it.

The best way to come up with new jokes is to find them in your daily life. I had a really funny experience a while back. My wife and I were out to dinner with a group of friends, and just as we were ordering our food, our friends brought up the weirdest topic of conversation. Totally out of the blue, they started talking about their way-cool designer toilet. It comes from Japan and it’s called a “Toto”. It has a heated seat and tons of features, the best one being this weird little motorized bidet gizmo that slides out underneath you and washes you clean when you are done. Yes, this conversation was happening just as we were perusing our menus. I was pretty much speechless during this curious filibuster, but I was genuinely fascinated as I had no idea that commode technology had advanced so much in my lifetime. Where had I been while these incredible technological developments were being developed? I really need to get out more and 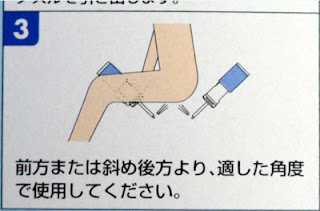 learn about what’s happening in the world. So the funniest part of this conversation came when my friend asked us, “What’s the dirtiest part of your body?” For some reason I couldn’t answer this one immediately, and the next day I realized that I wished I’d said, “My mind.” And then he asked us a rhetorical question, “You wouldn’t just wipe your hands with paper to get them clean, would you?” My wife answered this one quite well, as well she should because she has a sharp mind and a PhD in Public Health. She replied, “Well, you don’t pick up food with your butt.” 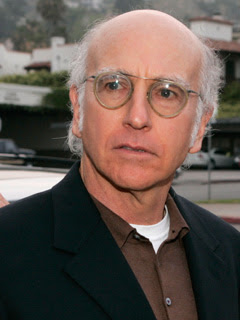 The next day I found myself thinking about this situation and I realized that the whole thing was like something out of the TV show “Curb Your Enthusiasm”. Larry David, the offbeat writer for “Seinfeld” has made a career out of observing weird interpersonal situations in everyday life and depicting them in his comedy. So that was my Larry David experience! But I really don’t think that I’m going to get a Wally cartoon out of it, as it feels like it could be another one like that Pee Wee Herman joke, and the fans of Toto toilets are a pretty small market to cater to. But I do have a new Wally design on a similar subject. It was inspired by my dog, Ivy and it is posted below. Do you think it will sell? 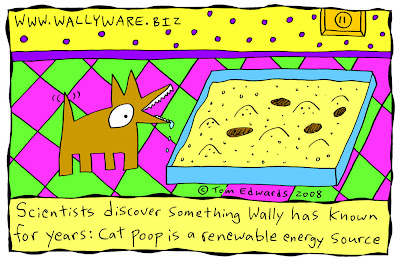 This entry was posted in Family, Humor and tagged funny, jokes, Toto toilets. Bookmark the permalink.