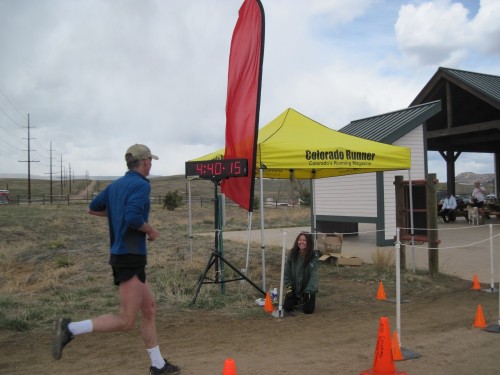 If you know me or you’ve read my bio, you’ll know that I’m a long distance running geek.  One of the things I really like about running is that it’s an honest sport in that you can’t pretend you are better at it than you are because the clock has the final word.  The past few years have seen a major slowdown in my race times, and I really don’t like getting slower.  Who does?

So this year I decided to change gears a bit and try some new things.  The past six months, I ditched the speed workouts that were beating up my hamstrings and I did a lot of barefoot running to combat my persistent injuries.  This seems to have helped a lot.  I’ve been running a lot of long slow miles… 90 in just one week last month!  I’m running relatively injury free now.   My first goal of the year was to run the Greenland 50K, a hilly trail race near Colorado Springs. The course is an approximately eight mile loop that we did four times to cover the 31 mile distance.  It was great running that way, because I could judge my pace really well by following my split times.  There was a tough 1.5 mile hill on the backside of the loop that wasn’t too bad the first three laps, but on the last one my legs felt like cement on the final climb.  I managed to have a really strong finish on the last two miles of downhill.  I passed one runner and it felt good to kick it in hard.

The weather on Saturday was near-perfect.  There was some snow and slush on the course, and the hills were a lot tougher than I’d expected, but I managed to come in within sixteen seconds of my predicted time.  I was shooting for nine minutes per mile (4 hr. 40 min.) and as you can see by the picture above, I was pretty darn close.  I took fifteenth place out of 115 runners, and I was third in the 50 – 54 age group.  These ultras seem to even the scales a bit between the age groups, so I think I’ll try doing some more of them in the future.  50K is so close to a marathon, I think I’ll have to go up to 50 miles to call myself a REAL ultra-marathon runner. We’ll see!  It was really nice to have Lori cheering me on each lap, and the spectacular spring weather made for an excellent day.  That’s Pike’s Peak in the background of the picture below. 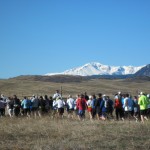 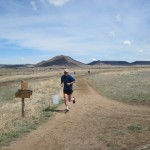 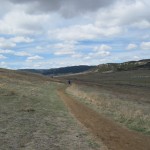